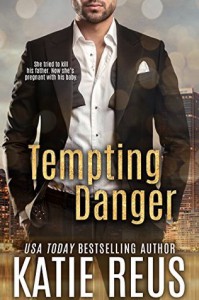 Tempting Danger is a sort of continuation from Retribution. While Retribution focuses mostly on Nika and Declan, the overarching story continues. Alena is Nika's older sister and they have finally killed all the people responsible for their parent's murder. However, the trouble isn't done for Alena. She used Andre to get close to his father, the last man she needed to kill. Using Andre left her with guilt...and a baby.

Alena is kind of a badass. She planned and executed 3 people without getting caught. Her relationship with Andre may have started as a ruse, but she did find him to be a caring, good man. She knew he would never forgive her betrayal though. Andre hated his father almost as much as Alena did, so it was no skin off his back when his father died. But he never suspected Alena of the betrayal and his pride was seriously wounded. But, he did have real feelings for her. So, fast forward 4 months, neither of them has gotten over each other, and now she has to tell him she is pregnant. They both are a bit skittish around each other. She can't believe he would forgive her so easily, he is determined to be an alpha caveman and keep her. Communication between these two is dicey and become the major stressor in the story. While not my favorite trope, it was all very understandable and natural for the history these two had with each other. Overall, Tempting Danger gives you an alpha male, a strong female, a touch of actual danger, and an unexpected baby that you can read in one sitting!

growly alpha male heroes like those in books by Alexa Riley, Aurora Rose Reynolds, Harper Sloan...then you will probably like Tempting Danger!