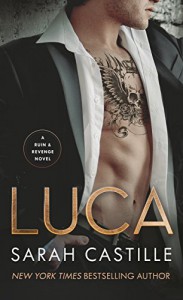 Star crossed lovers for sure! Luca is a mafioso and Gaby is a cop. Their differences are obvious-Gaby is a law abiding citizen, Luca prefers to bend the law to his will. Gaby is a woman who takes care of herself while Luca feels that women should be protected. One thing they have in common (besides scorching hot chemistry) is their desire to get rid of the drug cartels in Las Vegas. While their methods might be different, the goal is the same. So, do the ends justify the means for Luca and Gaby?

Gaby's husband was a cop like her and he was killed in the line of duty by a drug kingpin. Gaby is determined to seek revenge but is removed from the case. She meets Luca by chance while they are in the hospital recovering from gunshot wounds and he is entranced by her. He uses his connections to track her down but when he finds out she is a cop it could be a deal breaker. There are few rules that are as strictly followed by the mafia as the 'thou shall not fraternize with cops'.

Gaby has always been an independent woman. She grew up without a mother and became a cop simply to try and make her father proud. Her marriage to David was important to her because he provided the stability she had missed in life. But, their life together was vanilla and after she meets Luca, she realizes that maybe she wants more from life. He is a bit 'old fashioned' when it comes to women (old fashioned as in cave man behavior) and frankly I found it a bit offensive. It wasn't really sexy. I am all for alpha men, but his behavior came off as casting women down to their 'proper place'. Not attractive.

Even with my irritation with Luca's abhorrent behavior, I was sucked into the story. Who is after Gaby? Will she kill the man responsible for her husband's death? Will Luca change his sexist beliefs and stop being a douche canoe (ok, the answer to that one is yes)? I really did want to know! So, even though I was not really rooting for Luca, I still cared what happened to Gaby! If you like star crossed/opposites attract type stories, this is an interesting pick for a weekend read! Nico, book 1, was better in my opinion though, so if you haven't check out that one, you should! Its also a pretty steamy read! Luca is quite the dirty dominate in the bedroom (and kitchen, and VIP room, and closet...)

The Eagle Elite series by Rachel Van Dyken, The Harrison Street Crew series by Katana Collins, Cole by Tijan, Hearts of Blue by LH Cosway...then you will probably like Luca!