Monster in the Closet (The Baltimore Series) 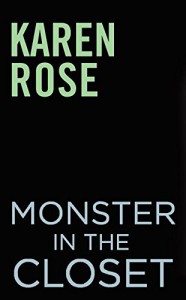 A murder with an 11 year old witness, an intern at an equine therapy program with a hidden agenda, a dirty lawyer looking to cover up his crime, a slew of cops trying to find the truth, and more! Monster in the Closet has a cast of characters that will probably require you to keep a list-sometimes it was difficult to keep up with them all!

Jazzie witnesses the aftermath of her mother's murder, and knows that her father is responsible. But she is so traumatized from the attack, she hasn't said a word. Taylor is working with Jazzie and her sister, Janie, at the equine therapy program in hopes of helping the girls.

Then you have Taylor who has really come to town to find her father, after years of being hidden away by her mom, who has recently passed away. Ford, the therapy owner's son, has his own harrowing story. He and Taylor start to fall for each other during all this tangled mess.

So, then, in all this, the killer targets Taylor because Jazzie has gotten close to her and is opening up. As the reader, you know who the killer is the entire book, but you don't know how it will all play out which is what keeps you flipping pages.

My biggest issue? So many subplots. Honestly, it got a bit distracting and off track. It made it difficult to stick with the book at times because it felt that each chapter went into a different subplot or new characters. Seriously, there are a LOT of characters. But, the suspense is great, the romance between Taylor and Ford was sweet, and I adored Jazzie and Janie.

While this is book 19 in a series, and book 5 of that subseries, I have not read the other books and was able to keep up and not feel that I missed something; however, the characters from the previous book play important roles in the story. Its not critical to KNOW their backstory, but I would imagine that if you had read the previous books, getting a little check in with old favorites would be delightful. I have always wanted to read Karen Rose's books; she has a series set in Cincinnati that I am super interested in!

Under Fire by Scarlett Cole, The Hunting Ground by Katee Robert, After the Dark by Cynthia Eden...then you will probably like Monster in the Closet!

Monster in the Closet